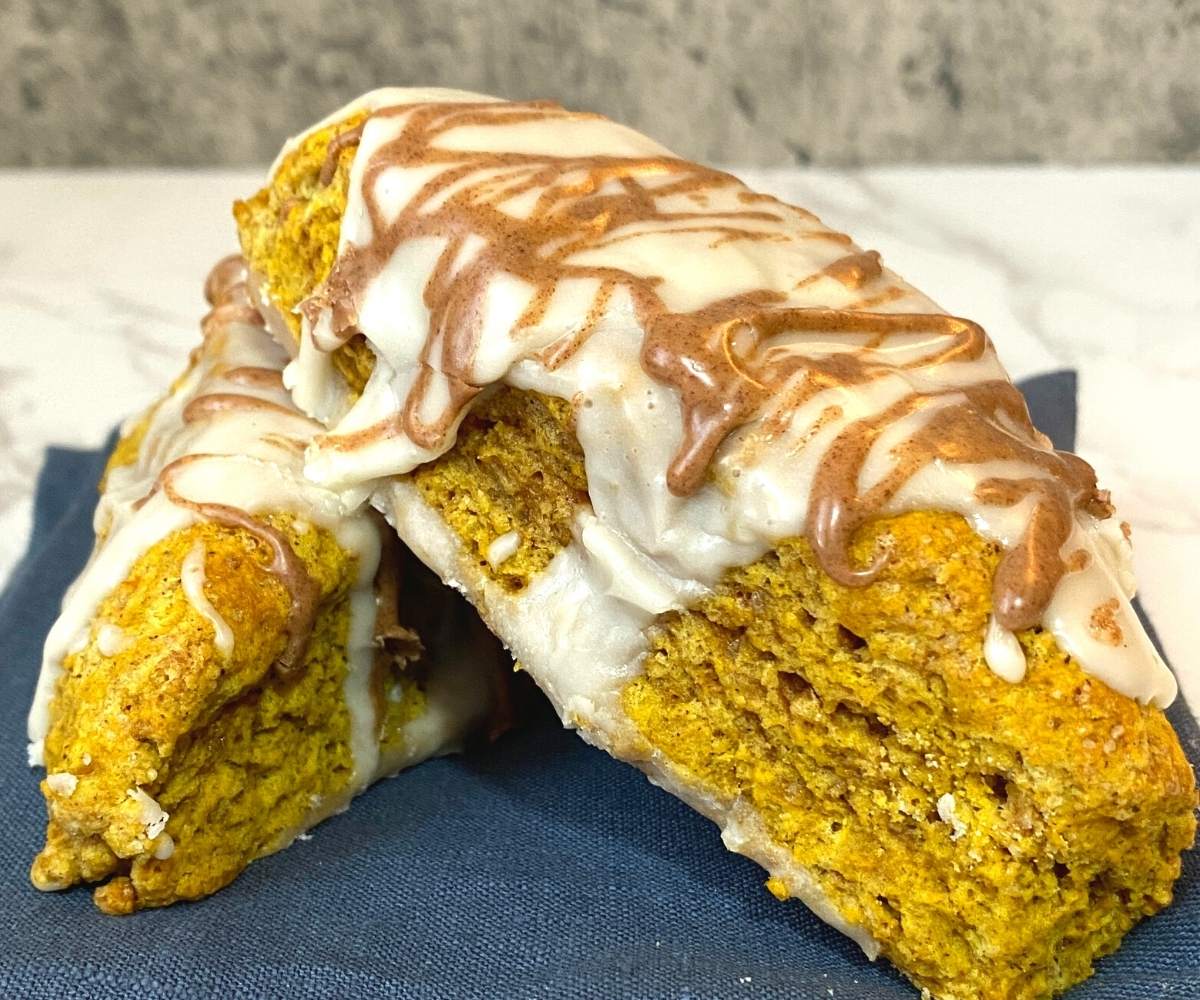 This pumpkin scone recipe has a savory base and a two kinds of sweet glazes.

Starbucks has so thoroughly marketed pumpkin spice flavor, that we originally thought of pumpkin spice scones as an American recipe. However, we were thrilled to discover that credit for the idea of adding pumpkin puree to a scone goes instead to our favorite island subcontinent, Australia.

A Short History of the Scone

While the first written mention of a scone, according to the Oxford English Dictionary, can be traced back to 1513, it’s unlikely that we would have recognized whatever they were referring, since it didn’t yet contain baking powder. Modern scones are typically leavened with cut butter (the steam from the melting butter causes the dough to rise) and baking powder, and without the baking powder, they likely would have been quite dense. Needless to say, scones made their way through culinary history from England and Scotland to America and Australia. The invention and popularization of chemical leaveners in the early 20th century created a revolution in home baking, and scones were part of the wave of baked goods that saw a renewed popularity, perhaps now that they didn’t have the consistency of bricks.

Now, for this recipe, we also need to tell the story of how the cultivation of pumpkins spread. Pumpkins originated in North America but were being grown in England as early as the 17th century. The English were not then, and seem not to be now, big pumpkin fans, so they were mostly fed to livestock.

The pumpkin came with the English to Australia, where unlike many other crops, it adapted enthusiastically to the climate and grew prolifically. While Americans think of pumpkin as closely associated with our national identity (we have a whole holiday that celebrates pumpkins!), Australians have been eating far more of them for many years. 19th Century Australian cookbooks include a range of pumpkin recipes from pumpkin fritters to a recipe for cooking young green shoots of the pumpkin vine as imitation spinach. Today, Australians consume roughly three times as many pumpkins as their American brethren, perhaps because so little of this pumpkin recipe innovation has made its way across the Pacific.

Bringing it All Together: The Pumpkin Scone Emerges!

At some point in the early twentieth century, a wise Queensland housewife added some pumpkin puree to her scones and the pumpkin scone was born. Pumpkin scone recipes appeared in a flurry of early 20th century Australian newspapers, won many county fair prizes, and were late further popularized in the 1970s by Lady Florence Bjelke-Petersen, whose husband was a Queensland bigwig, further confirming their identity as a distinctly Australian delicacy. The Australian version of the pumpkin scone, like most British scones, contains only a small amount of sugar, since it would typically be served with jam or sweetened whipped cream.

It’s a bit mysterious how pumpkin scones made their way back across the Pacific from Australia to America, but there is no doubt that this recipe, which is inspired by the Starbucks version (why improve on perfection?), is distinctly American , since it is unbelievably sweet, thanks to the addition of not one, but two glazes.

On a scone kick? Beset by a unexplainable desire to learn more about the history of scones? Wondering why we love pastry cutters so much? Never fear, we’re here to help. Check out these delicious scone options that will also provide answers to your burning scone-adjacent questions:

Note: this recipe only calls for a half cup of pumpkin puree. Need to use up the rest of the can? Try these Pumpkin Surprise Muffins.

For the Pumpkin Scones:

For the Spice Glaze: