Brownie lovers divide into two camps – lovers of cake brownies and lovers of deep dark fudgy brownies. This brownie recipe without cocoa powder relies on a lot of chocolate for its deep, dark, fudgy texture.

A Short History of Brownies

Like many great baked goods, brownies evolved over an extended period of time and many chefs claim a role in their invention. Mrs. Palmer of Chicago’s Palmer House Hotel (now the Palmer House Hilton Hotel) is said to have asked her chefs to develop a dessert that could easily be transported by hotel guests to the Columbian Exposition World’s Fair in 1893. The resulting brownie topped with walnuts and apricot jam remains a favorite of Palmer House guests. Right around the same time, Fannie Farmer published a confection that she called a “brownie” in the 1896 edition of her Boston Cooking-School Cookbook. Her version, however, was really more like a small molasses cake. By 1906, Farmer had come to her senses and the later edition of the cookbook included a version that included chocolate and was much closer to what we know of and love today as a brownie.

Like many great American debates (waffles vs. pancakes, to name one we care deeply about), their are passionate opinions on both sides as to how to make the best brownies. “Cake Brownies” have a cakier texture and typically rely on only cocoa powder, rather than chocolate, for their chocolate flavor. Cakey brownies have less butter and sugar, resulting in a lighter, cakier brownie. “Fudge Brownies,” on the other hand, are typically a brownie recipe without cocoa powder. The rich chocolate flavor comes from real chocolate, not cocoa powder. They have a much higher fat to flour ration than their cakey counterparts, with the main ingredients being butter, chocolate, and sugar, resulting in a flatter appearance and fudgier texture. The flavor of this type of brownie is very reliant on the quality of chocolate you use, so we like to use a higher quality chocolate like Caillebaut when we can.

If ever there was a prize for “easy dessert”, these brownies would be sure to win. A few easy steps and one bowl produce scrumptious fudgy brownies.

Love brownies? Here are a few more of our favorite variations

Useful Tools for Making These Brownies 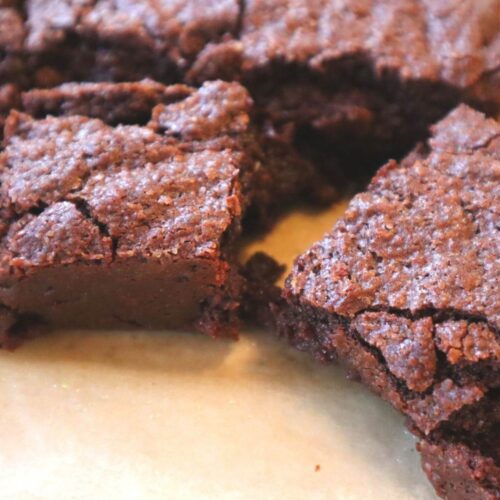