The word “mousse,” roughly translated from French, means “foam.” The perfect chocolate mousse should achieve a near-impossible balance of sweet, rich, and light. This recipe achieves this magical combination of richness and lightness with beaten egg whites, rather than heavy cream.

A Short History of Chocolate Mousse

Mousses are a base (often consisting of egg yolks and a favoring agent) lightened with either beaten cream or beaten egg whites. They first became popular in the 18th century. Early mousses tended to be savory, rather than sweet.

By the late 19th century, Chocolate became more affordable and widely available. Several recipe authors, including most notably famous post-Impressionist painter Henri Toulouse-Lautrec, separately combined Chocolate with mousse technique to make a chocolate flavored version. Toulouse-Lautrec’s version was almost lost, perhaps due to his poor name choice. Who would want to eat “chocolate mayonnaise”? The great Escoffier, in his definitive “Guide Culinaire,” included a number of frozen and savory mousses, but no chocolate mousse!

This version of chocolate mousse is made with raw eggs. The yolks are cooked over a double boiler, but the whites are not. Raw eggs can contain salmonella. If this creeps you out, or if you are making this mousse for someone very young or very old, you can consider using fresh egg yolks and a pasteurized egg whites (from a carton). You can also purchase pasteurized eggs at the grocery store. If that still creeps you out, just make this cream-based version of chocolate mousse. Life is too short to worry about salmonella!

And, here are a few other mousse recipes and mousse-like recipes, should this intrigue you further:

It is VERY annoying to make a mousse without an electric hand mixer or a stand mixer to help beat the egg whites. Here are our some of our favorite mousse tools:

While we like to make this mousse without cream, it is delicious topped with some whipped cream. We like to serve it out of small drinking glasses, but ramekins would be equally nice. If you’re going for a whipped cream topping, you can also put some chocolate shavings on top. 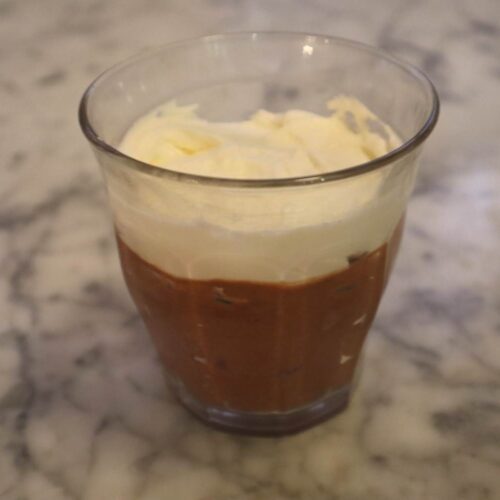 For the Chocolate Mousse

For the Whipped Cream Topping

Keyword chocolate
Tried this recipe?Let us know how it was!