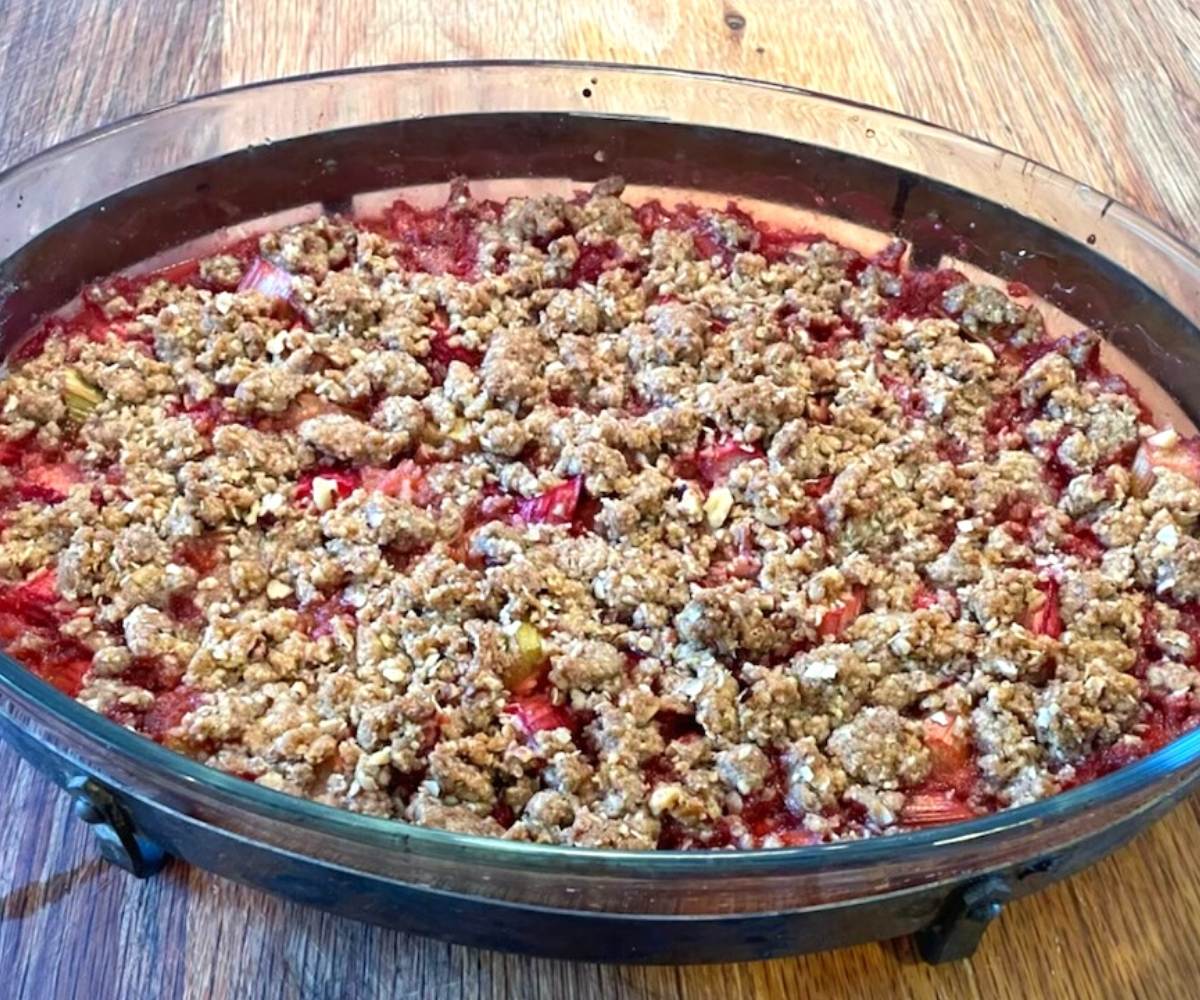 Does your family share our insatiable love of rhubarb topped with crispy oaty goodness? This classic rhubarb crisp recipe is supersized! Bake it up in a 9 x 13 pan and celebrate the best of rhubarb season with a party.

A Short History of Crisps

While some may think of fruit crisps as a traditionally English dessert, they seem to have originated in the United States and Canada in the 19th century. The Pratt Institute School of Home Sciences and Arts published the first crisp recipe in 1924 in Everybody’s Cook Book: A Comprehensive Manual of Home Cookery, edited by Isabel Ely-Lord. Ely-Lord’s version topped apples with a mixture of flour, shortening, water, and sugar.

Antecedents of the crisp, such as the Brown Betty, were first published in the late 19th century. The Brown Betty layers fruit with a sweet breadcrumb topping. Crisps (known as crumbles in England) are said to have become very popular in England during WWII. At the time, rationing limited access to all the best baking ingredients like butter and sugar. However, we could find no such record in Jill Norman’s adorable Eating for Victory (Michael O’Mara Books Ltd., 2007), a compilation of British WWII food pamphlets. We did, nonetheless, find a recipe for a baked apple charlotte. The baked apple charlotte consisted of sliced apples layered with breadcrumbs and sugar rubbed with butter, perhaps the closest thing to a crisp.

Looking for more fruit desserts? Here are a few other ideas

Is tangy rhubarb your favorite dessert vegetable, too? Or, do you just have an excess of fresh rhubarb from a giant rhubarb plant growing in your back yard? Either way, you’ll need to make your way over to our other rhubarb desserts.

This crisp is really just excuse to buy an adorable ceramic 9 x 13 inch baker. Here are some of our favorites:

This classic rhubarb crisp recipe is supersized and designed for a crowd in case your family, too, shares an insatiable love of rhubarb topped with crispy oaty goodness. Bake it up in a 9 x 13 pan and celebrate the best of rhubarb season with a party.
5 from 2 votes
Print Recipe Pin Recipe
Prep Time 15 mins
Cook Time 44 mins
Course Dessert
Cuisine American
Servings 12 servings

For the fruit filling:

For the crunchy topping:

For the sour cream whipped cream:

For the fruit filling:

For the sour cream whipped cream:

Store in baking pan, covered tightly with plastic wrap. Reheat in oven or microwave. If you prefer your crumble on the sweeter side, you can replace half of the weight of rhubarb with strawberries, for a strawberry rhubarb crisp, a classic American dessert.
Keyword crumb topping, crumble, rhubarb
Tried this recipe?Let us know how it was!