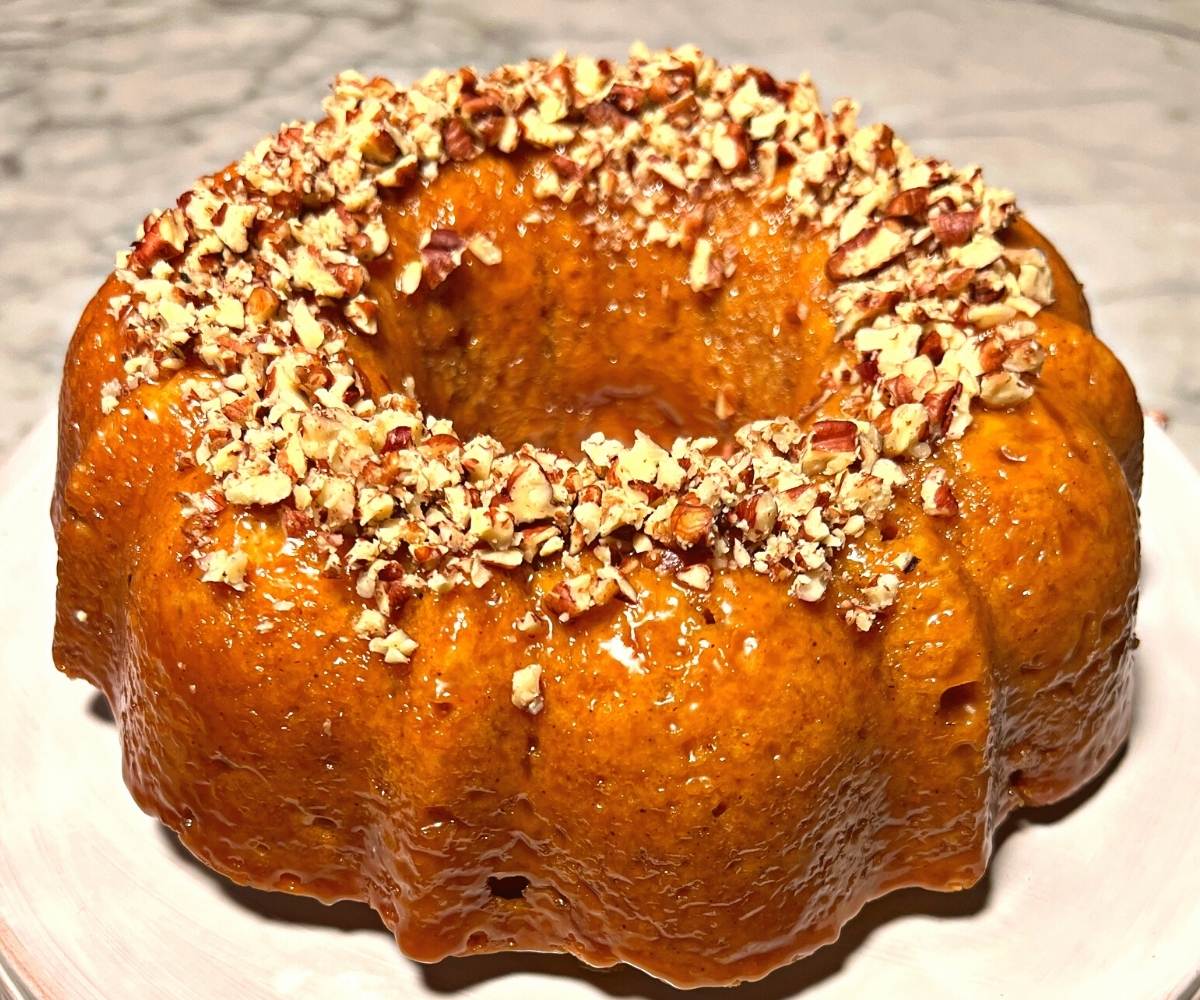 This pumpkin bundt cake recipe gets slathered with a sticky bourbon glaze and sprinkled with pecans for a gooey, crunchy finish.

A Short History of Pumpkin Cake

While we think of pumpkins as an American icon, they seem to have originated in Central America some 7,500 years ago. The oldest domesticated pumpkin seed was found by archaeologists in Oaxaca, Mexico, where it went on to become a crucial ingredient in delicious green mole.

At some point, the pumpkin migrated north, where by the 17th century, it had become a favorite food of English colonists. It was prized for the ease with which it could be grown and its versatility. A recipe for pumpkin pie was included in one of the first printed cookbooks to emerge from North America, John Josselyn’s 1672 New-England Rarities Discovered. In the 19th century, the craze for pumpkin pie gained steam and it became very fashionable to serve the dish at Thanksgiving.

Despite the popularity of pumpkin pie, a pumpkin cake recipe did not emerge for another century, when the mass marketing of chemical leaveners made quick breads (and cakes) popular. The earliest recorded pumpkin cake recipe seems to have been written by Marion Harland (nom de plume for Mary Virginia Hawes-Terhune), who published prolifically on topics around house keeping and cooking. It was printed by the Chicago Tribune in 1912. Marion Harland is a favorite of ours for the dry wit that she applied to instructing housewives. Here’s a choice example of her didactic prose “Don’t delude yourself, and maltreat those who eat your cake, by trying to make [baking] soda do the whole or most of the duty of eggs.”

To Bundt or Not to Bundt

Today we’re tempting fate again by using our favorite 6 cup bundt pan. Baking with a bundt brings with it the exciting moment (or 15 minutes) of the will-or-won’t the cake emerge from the pan. As a reminder, here are some bundt tips:

Feeling super confident about your bundt-ing skills now that you’ve read this brief set of instructions? Huzzah! Check out our rum cake or our orange-almond bundt cake for a continued bundt-themed adventure.

Feeling nervous? That’s ok. You can just grease and line an 8-inch springform pan with parchment paper for a cake that is 100% guaranteed to emerge from the pan in one piece.

Ingredients for the Pumpkin Cake Recipe

For the pumpkin cake:

For the bourbon glaze:

Note: if you don’t happen to love Manhattans and stock bourbon in your home bar, feel free to substitute a dark rum here.

This cake is excellent served with a little bit of bourbon spiked whipped cream or vanilla ice cream.

Instructions for the Pumpkin Cake Recipe:

For the pumpkin cake:

For the bourbon glaze:

To assemble this pumpkin cake recipe: