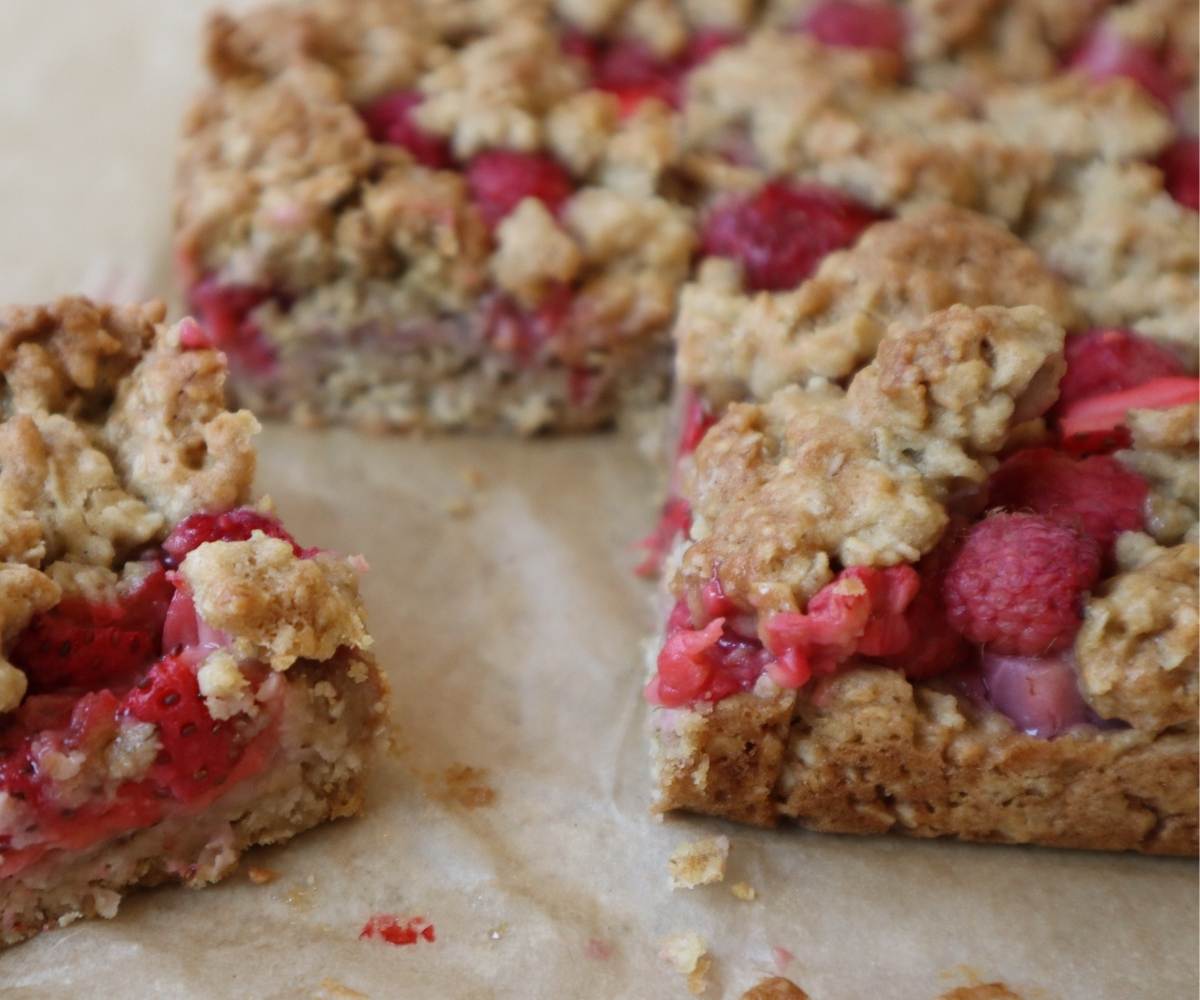 This strawberry-raspberry oatmeal bar recipe is yet another perfect recipe for a summer picnic. It essentially consists of a layer of fruit sandwiched between two layers of oatmeal cookie batter. The buttery crust is softer and more cookie-like than the traditional crumbly topping. Does life get any sweeter?

American oatmeal cookies are likely a descendant of Scottish oatcakes. Oatcakes were first documented in Scotland as early as the Roman conquest, in 43 AD. Oats are one of the few grains that grow as far north as Scotland and until the 20th century were the staple grain. Hence oatcakes evolved instead of bread in other cultures and were generally served as a carbohydrate accompanying a savory dish.

In the 17th century, oats traveled with Scottish immigrants to North American. In America, until the mid-19th century, oats were at first primarily used to feed horses. This was because, in their wholegrain form, they required extremely lengthy cooking time to make them delicious for humans. In the later half of the 19th century, technological innovation allowed the development of rolled oats, which could be cooked much more quickly. The military quickly adopted oats as a cheap, filling, and now quick to prepare, staple food during the Civil War. Following the civil war, experimentation with oats continued with the invention of granola. The first published oatmeal cookie recipe is credited to Fannie Farmer and was printed in the Boston Cooking-School Book’s 1896 edition. The cookies later entered the mainstream when Quaker Oats wisely printed its version of the recipe on the back of its box in 1906.

Love oat-based baking? So do we! Here are a few more favorites:

Searching for the best option for your next picnic? Pick a dessert bar from some of our favorites: 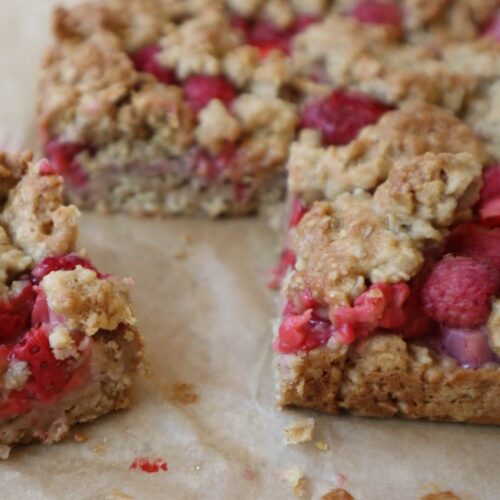 This strawberry-raspberry oatmeal bar recipe is yet another perfect recipe for a summer picnic. It essentially consists of a layer of fruit sandwiched between two layers of oatmeal cookie batter. The buttery crust is softer and more cookie-like than the traditional crumbly topping. Does life get any sweeter?
5 from 1 vote
Print Recipe Pin Recipe
Prep Time 20 mins
Cook Time 35 mins
Course Dessert
Cuisine American
Servings 9 servings

These strawberry-raspberry oatmeal bars keep well in an airtight container or wrapped tightly in plastic wrap for several days. If you’re out of fresh berries, you can replace the berries with different flavors of fruit. Ripe peaches are another favorite in our house.
Keyword cookie, oatmeal, raspberry, strawberry
Tried this recipe?Let us know how it was!