Thankfully the Dutch pancake pan is an imaginary pan, and Dutch pancakes can be made in just about any metal pan or glass pie dish. Should you have a special pan that you want to test, we’re sharing our favorite recipe here.

Like the Dutch Pancake Pan, the Dutch Pancake is a bit of a figment of the imagination. Confusingly, while there are in fact pancakes made in the Netherlands, they can best be described as slightly thicker crepes. Entire restaurants in Amsterdam are dedicated to these pancakes (our favorite is aptly named The Pancake Bakery), but the pancakes they serve there would not be recognizable to any American as a Dutch Pancake.

The things we call Dutch Pancakes (or Dutch Babies) are in fact German in origin. The term Dutch here, just like in the phrase “Pennsylvania Dutch” is an elision of the German word for “German,” “Deutch”. A family restaurant in Seattle claims to have invented the Dutch Baby Pancake, by stacking three small (aka “baby”) (presumably German-style) pancakes on a plate. Thankfully, no babies were harmed in the invention or making of the Dutch Baby. Other names for this delightful invention include a Bismarck, a Dutch puff, or a Hootenanny. If you’re looking for a REAL Dutch pancake (as in, one that can trace its origins to Holland), check these guys out:

Now that we know that there’s no such thing as a Dutch Pancake Pan, and Dutch Pancakes are a misnomer, what’s a German Pancake?

Great question! German pancakes’ closest relative are, in fact, a Yorkshire Pudding. Both consist primarily of eggs, with a little bit of flour and milk. The ingredients are beaten together then poured into a hot pan. Unlike most pancakes, which are fried in a pan, the Dutch Baby is baked in a hot skillet. The hot air causes the pancake to rise (and immediately fall once it cools). However, while Yorkshire puddings are typically small, around four inches in diameter at most, a Dutch Baby, or German Pancake, despite its name, is typically cooked in a 10-inch skillet. It can be shared, or, if you’re a pancake fanatic, eaten solo (typically with some regrets, once its done and your belly is exremely full). It’s often often served sprinkled with powdered sugar and perhaps a squeeze of lemon juice, or with some maple syrup. Fresh fruit is another popular topping.

Useful Tools for Making this Pancake 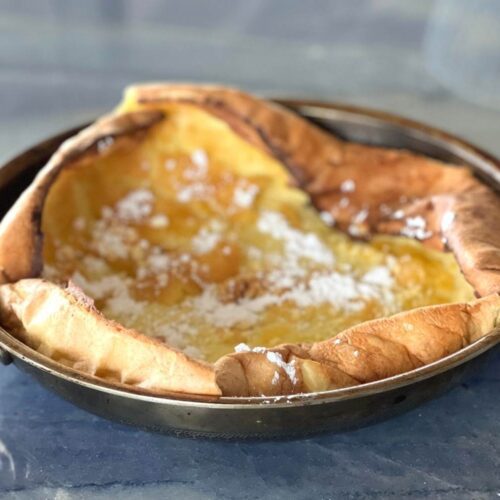 Keyword pancake
Tried this recipe?Let us know how it was!