Most pancake recipes call for buttermilk to give them a tender texture. But, most people don’t keep buttermilk lying around their refrigerator. A can of evaporated milk, however, lasts forever. Many of us, whether we know it or not, have one rattling around the back of their cabinet.

What is Evaporated Milk?

Evaporated milk is made by simmering milk until it loses 60% of its water. Homogenization then integrates the fat molecules into the liquid so that they don’t separate over time. This gives evaporated milk a much longer shelf life. The milk is then packaged in cans and sterilized. The heating process gives the milk a thicker, creamier texture and a very mild caramel flavor, without any additional fat.

Why Evaporated Milk in Pancakes?

The thick, creamy texture of the evaporated milk makes it an ideal ingredient in homemade pancakes. The resulting pancakes are tender and just a little sweet, without any additional fat.

How Do I Use Up the Rest of the Evaporated Milk?

Wondering how to use up the rest of the can? Here are a few ideas:

1) Evaporated milk is wonderful in coffee. It tastes like half and half, with way less self-indulgence.

What’s the Difference Between Evaporated and Condensed Milk?

A Short History of Evaporated Milk

In the nineteenth century, drinking milk was an iffy proposition. Fresh milk from cows was teeming with bacteria and spoiled quickly. Getting sick from spoiled milk was so common that it had it’s own name: “milksick.” A young dairy farmer, Gail Borden, invented evaporated milk following a transatlantic voyage that was so rough that the cows became seasick and did not produce milk. In the late nineteenth and early twentieth centuries canned evaporated milk was critical for feeding armed forces.

Can I Store This Pancake Batter?

Yes, assuming that your eggs were not on the brink of expiry, this pancake batter should keep for several days in an airtight container in the refrigerator.

I Couldn’t Find Evaporate Milk In My Pantry But I Still Need Pancakes!

No problem! We’ve got you covered: 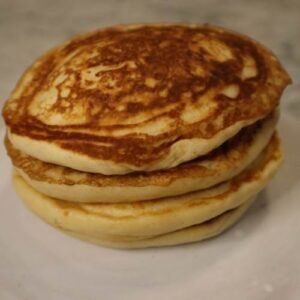 Keyword evaporated milk, pancakes
Tried this recipe?Let us know how it was!