Do you ever wish you could eat cinnamon rolls for dessert AND breakfast? This cinnamon cookie recipe swirls chunks of cinnamon roll filling in a fluffy sugar cookie.

A Short History of Cinnamon in Sweets

Cinnamon is perhaps the spice that launched the age of exploration. The ancient Egyptians used it in their embalming process. However, access to the spice (which is originally from Sri Lanka) was lost during the intervening years. Arab traders reintroduced it to Europe in the Middle Ages. As demand increased, sailors sought to find the source. Portuguese sailors first landed in Sri Lanka in 1518. The Dutch arrived in the 17th century and wrested control. Then came the British. By the 19th century, farmers in Guyana, Brazil, and the West Indies were cultivating cinnamon. The spice became more readily available and cheaper.

The inclusion of cinnamon in a flavoring agent in desserts can be traced back to the 18th century. “Chelsea Buns” (the British equivalent of a cinnamon roll) first began to appear at that time. Variations on the cinnamon roll abound, particularly in Scandinavia and Germany. Immigrants from those regions brought recipes with them to the United States. In 2014, a shocking about-face, the European Union began cracking down on excessive use of cinnamon in pastries. Health officials worried that excessive amounts of coumarin, a natural substance found in cinnamon, could cause liver damage. Tragically, moving forward, bakers are limited to 15 milligrams of cinnamon per kilogram of pastry. As the head of the Danish Pastry Association lamented, it was “the end of the cinnamon roll as we know it.”

Channeling your inner 17th century Portuguese explorer? Just can’t get enough of cinnamon flavor in your life? Here are some cinnamon desserts and treats – just watch your liver, will ya? 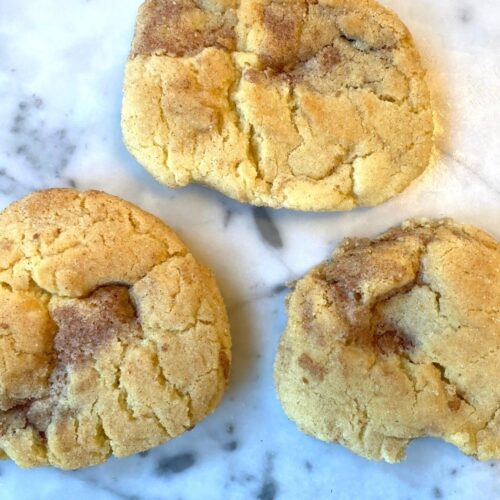 Cookies keep well in an airtight container for several days.
Keyword cinnamon, cookies
Tried this recipe?Let us know how it was!